Tuesday July 9th, 2019 By Friedrich Comments are Off 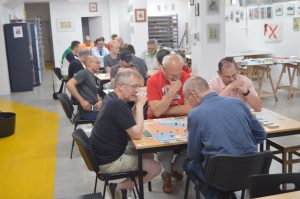 In the heats, I was fortunate enough to play against all three of the enthusiastic young Berlinese players, who did very well, picking up four well-deserved victories (including two as Prussia) and in David’s case, just missing the final, coming fifth overall.

The second round thus opened with me needing three straight wins to have a reasonable chance of getting to the final. An uphill task, but as Friedrich, and barring a débâcle, I was pretty confident of one victory despite facing veterans Arnold and Björn. Not for want of trying, neither the Russians nor the Austrias were able to break through a standard sector defence and a Hanoverian triangle kept the French at bay until three major Cards of Fate one after the other ended the game on turn nineteen.

Saturday afternooon saw me in the role of Elisabeth against one of the Spanish newcomers. The blue pieces never really got organised and all three alllies had chances. Mark, having taken Magdeburg and Halberstadt only needed to finish off the already weakened Hanoverians to take the last objective, and John was also very close to winning with the Imperial Army marching unopposed through Saxony. As luck would have it, an oversight by Friedrich left the last Russian objective unprotected and I was able to steal victory in turn seven.

So, on Sunday morning, I was back in with a chance. A win with Austria and I might be in the final. Opposite sat the experienced Maurice; but to my right was Anton, whose Russians would no doubt expertly assail the defence from the outset. Maurice seemed hesitant about where to stand and fight and gave up a lot of ground. He was unfortunate that I had more diamonds than he did and the Saxon defence broke down after the first major battle. Finally defending in hearts against the Russians allowed the Swedes to rapidly take four of their five primary objectives, screened by the dark green pieces that were battering the Prussians away to the south. Alex’s French were also making steady progress, helped by the fact that the entire Hanoverian army had rushed east to shore up the situation around Radeberg. Unluckily for Anton, the Tsarina died in turn seven. If she had held on just one turn more, it would have been a Swedish victory. India came in the very next turn followed immediately by Sweden, and so, having taken all the primary objectives, I had won! And not a moment too soon, the next card was America, Prussia would (and perhaps should) have won in ten turns, but I was in the final.

After the prize-giving, the four finalists sat down for their fifth game. As winner of the heats, I opted to play as Prussia, determined not to cock it up again as I had in 2017. Ex-world champion Alberto took Austria, leaving Anton as Russia and frequent-finalist Björn as France. My setup was pretty standard: 15 troops in Silesia, 2 in East Prussia, 6 with Dohna, to be supported by Heinrich with 3. Friedrich himself also had 3 and the job of delaying the Austrians in Saxony before joining the defence in Silesia. Winderfeldt, with just two troops, was supposed to knock out the Imperial Army. That left just one weak Prussian army and the Hanoverians facing the French. For many turns, I drew very few spades, but that was perfect. Plenty of cards in the other three suits meant a solid defence in Cammin could be mounted against the Russians and Swedes, Neisse could be held indefinitely against the Austrians and the French could be repulsed easily from Magdeburg. Or so it might have been but for the inevitable miscalculation in turn two. Having drawn three good spades with Hanover and bags of hearts already with Prussia, I guessed that the French would have, at best, average hearts. So, Ferdinand bravely stood on the spades/hearts boundary, ready to sneak southwards or crush any French armies rash enough to offer battle. Unfortunately, of his first six cards, Björn had three hearts and a reserve and Ferdinand was completely routed. This meant that I was scrambling to hold on to the last Hanoverian objective while hordes of heavily armed Frenchmen repeatedly try to crush Seydlitz by sheer weight of numbers.

Further east, Lehwaldt fought one fighting withdrawal before coming off and Dohna beat off the first Russian incursions. The Austrians were massing, but had not immediately sent anyone to support Hildi, who was chased away from his objectives.

The midgame saw repeated Russian attacks failing to break Dohna, but successfully whittling down my clubs hand, while the Swedes waited ominously ready to deliver the coup de grâce. Meanwhile, there was no respite round Magdeburg. I had plentiful hearts, but the French never seemed to run short and although repeatedly defeated, always survived to fight another day. The Austrians too had attacked in strength, but the defence at Neisse held, but for how long? The only ray of hope was that with the main force busy in Brandenburg, just one red army was left to face the two Hanoverians, who eventually managed to liberate Diepholz; although scraping together enough replacements cost me nearly every card I drew.

Each side took a subsidy reduction and just as it was becoming necessary to switch tactics against the Russians, the Tsarina died and France dropped out in quick succession. The second subsidy reduction left me with only four cards a turn to resist the Austrian assault until the Swedes decided to see sense. With virtually their entire might mustered in Upper Silesia, the white pieces finally pushed back the brave defenders, but failed to completely annihilate them and were thus obliged to continue fighting to hold on to their ill-gotten gains. Attention switched to Saxony, where driving Hildi off had already cost me thirty-odd points in diamonds, but Radeberg was safe just as long as I could field more armies than the Austrians. I was able to slow Alberto down further by capturing both of his supply trains, and he then made a small mistake which let me retake a Silesian objective, thus leaving victory within reach as long as I kept my head.

Enough turns passed for Ferdinand to race east, be routed and come back again, but finally the not-Sweden Cards of Fate ran out and I was Spanish Champion! Next stop: Berlin in September!